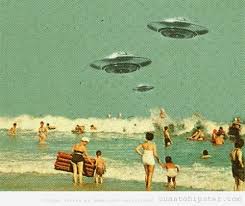 When they asked me to write this article, I only had in mind to talk about the history of the flying saucer that is parked in the middle of the road at the entrance of Benidorm: the UFO in which, every year for the last several years, the world’s best Rock n Roll festival takes place; The Funtastic Dracula Carnival.

We had a hunch that if we followed this thread we’d find some forgotten treasures from one of Spain’s best music eras, but we never thought that what we were dealing with was simply living history, and that their protagonists were about to tell us the story first person. This is the story of the first years of the discotheque CAP 3000, the world’s most visited UFO.

Benidorm, 1968: Julio Iglesias had just won the famous Benidorm Chanson Contest. What back in the day had been a charming fishing village was experiencing a boom. Giant skyscrapers were growing out of nowhere like mushrooms from one day to the next. Sun and beach tourism was hatching in what we could call the dictatorship’s late broke-era; between hippies, foreign girls in bikinis, parties, the Beatles, miniskirts, carefree youth, and the motorized revolution starring the Seat 600. A whirlwind of fresh air, a social phenomenon that made its summer holidays on the Spanish Mediterranean Coast and turned it into one of the European epicenters of nightlife.

A year later in 1969, a UFO landed in Benidorm. The world’s most photographed UFO. An eighteen-ton metal flying saucer with a bank-vault-styled entrance door. It opened with the name “CAP 3000” and, like in a sci-fi flick, started what later will become one of Europe’s most important music vanguard movements.

“Located in Benidorm, CAP 3000 opened in 1969 and became one of Europe’s biggest discotheques. In 1970 a Led Zeppelin concert happened, later on, James Brown, Slade, Los Angeles and The Foundations, among others. With a capacity of three-thousand people, it was a pioneer in the Costa Blanca nightlife…”

If we’re not mistaken, the engineers of discotheque CAP 3000 were Joan Cloude and Joan Pierre, two french cousins that, with their associate Celestino, a man from Pego (Alicante), found in Benidorm the perfect place and time to enterprise the beginning of one of the most fun eras of nightlife in Spain.

CAP 3000 was a true revolution and not only because of its flying saucer looks. The concept of Open-Air Discotheque, live performances, swimming pool, boutiques in the gardens, 3000 person capacity, and the music selection of its disc-jockeys set the discotheque apart as an international standard.

One of the first disc-jockeys from CAP 3000 was Juan Santamaría, a restless Valencian that had studied in France, worked in Benidorm in his youth and lived in Granada, Ibiza, Sitges and Amsterdam before starting his adventure in the UFO. This is the story of how he became one of CAP 3000’s first disc-jockeys.

“I left Amsterdam to spend some time home, then I parted to Benidorm. I was managing for a band in the hotels. A friend of mine from Castellars was managing some bands and proposed to try to move them over there. And that I did. One day, looking at some guys playing billiards, which I really like, they asked me if I wanted to play, they were one player short. They were French and I spoke it, so we started to chatter. My partner in the game happened to be the owner of CAP 3000, and we won. He wanted to know what it was I was doing there and I told him that I was trying to make a living in the hotels and stuff.

– Can you DJ? – he asked me, and I told him that was my thing. He took me to CAP 3000. The DJ booth was a helicopter, I was tripping! The discotheque got its name because of its capacity for up to 3000 people. At 11:30pm / midnight it was completely full. Long before opening time, people queued up with their money ready to come in. Back then summers were really long. I remember being there deejaying until November, going home for Christmas and then back to open again in spring. First only the inner part of the saucer were open, then in June, they opened the gardens. I started in like April ‘72 or ‘73 and deejayed there for two years.” 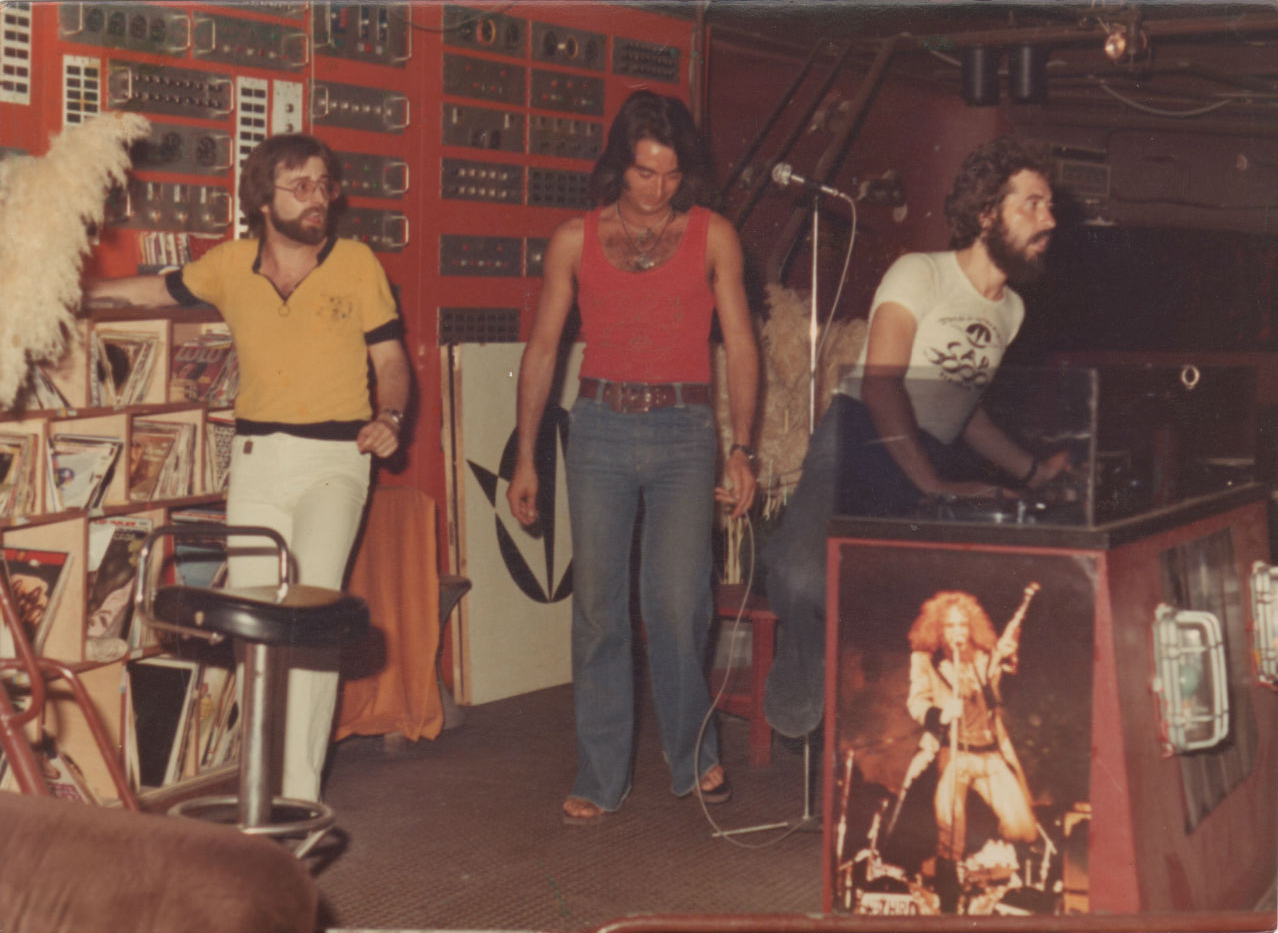 The DJ booth was a helicopter! A helicopter that, José Luis Martín (Jofra), who built the UFO, went to pick with his truck up from a junkyard in Madrid. The idea of making a flying saucer shaped discotheque was from Decora Carlos, from Alicante.

Filippo, the DJ that replaced the first DJs tells us that “the owner of CAP 3000 had been a helicopter pilot at the war with Algeria and he was determined to have a heli as decoration in the discotheque. He heard that one without a motor was in a junkyard in Madrid that came from the U.S. Army base in Torrejón, and they picked it up with a truck and brought it here. The first DJ’s, Juan de Santamaría and “el Canario” thought that it could be the DJ booth, and the sound engineer mounted two turntables inside it.” 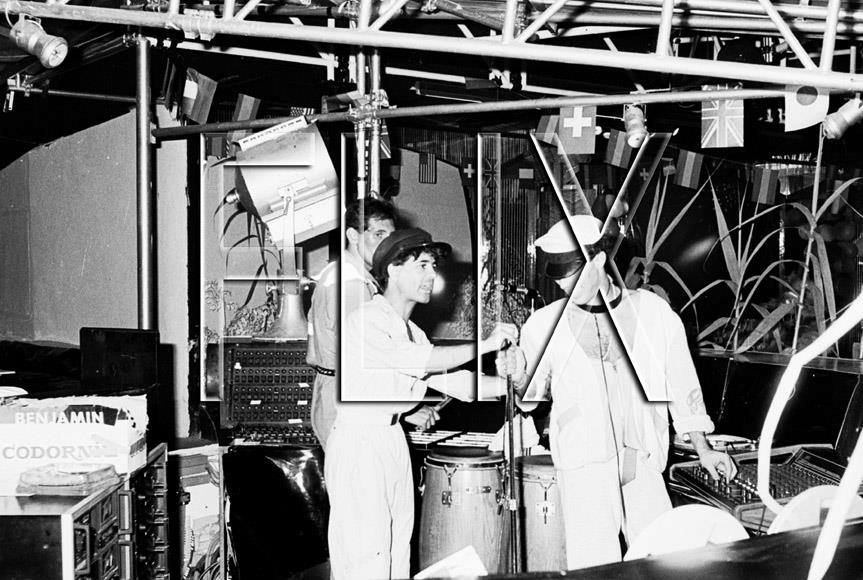 “I was the DJ in disco Tubos, in the center of Benidorm between 1971 to 1974. It opened every day the whole year and in winter, when the other discotheques were closed. Everybody came to dance in Tubos. At the beginning of the 1975 season, Juan Santamaría proposed being a member of CAP 3000’s DJ team.” 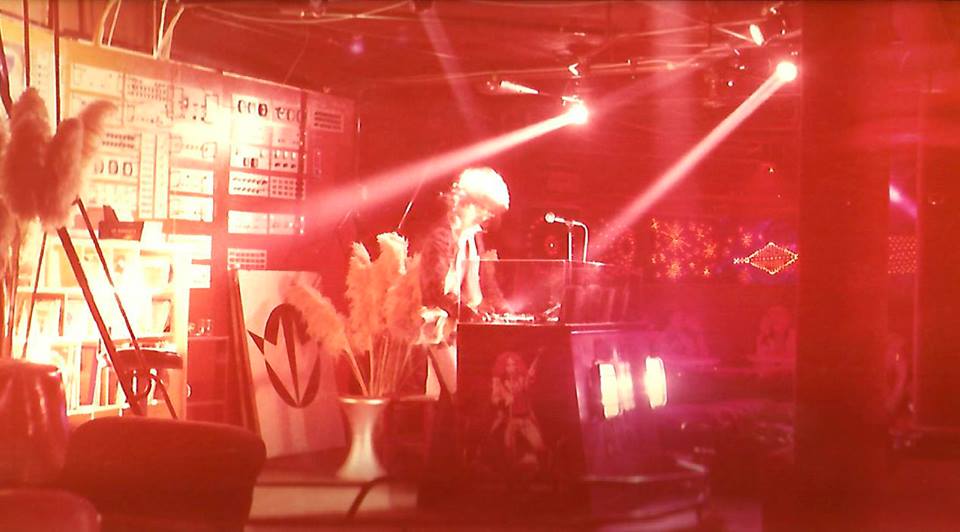 At the beginning of the seventies in CAP 3000 they played music imports. From North America: disco, funky, soul, rhythm and blues, rock and roll. From England: English pop (Beatles, Rolling, Glitter), glam rock, reggae. From Spain: rock, flamenco and Spanish rock, and from France and other countries in Europe, everything that was in trend. At that time the best music could be heard in Benidorm.

We did trips to England, U.S.A. or Amsterdam before each season started to buy all the new vinyl records that were playing in every country. 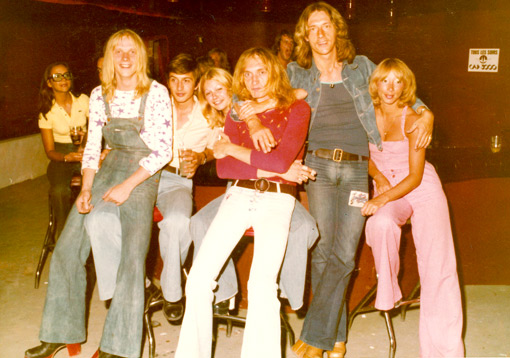 Disco shirts, chest hair, the mirror-ball, the Go-Go Dancers and the elegance were mixed with the glamour and psychedelia, spiraling towards the Saturday night fever. 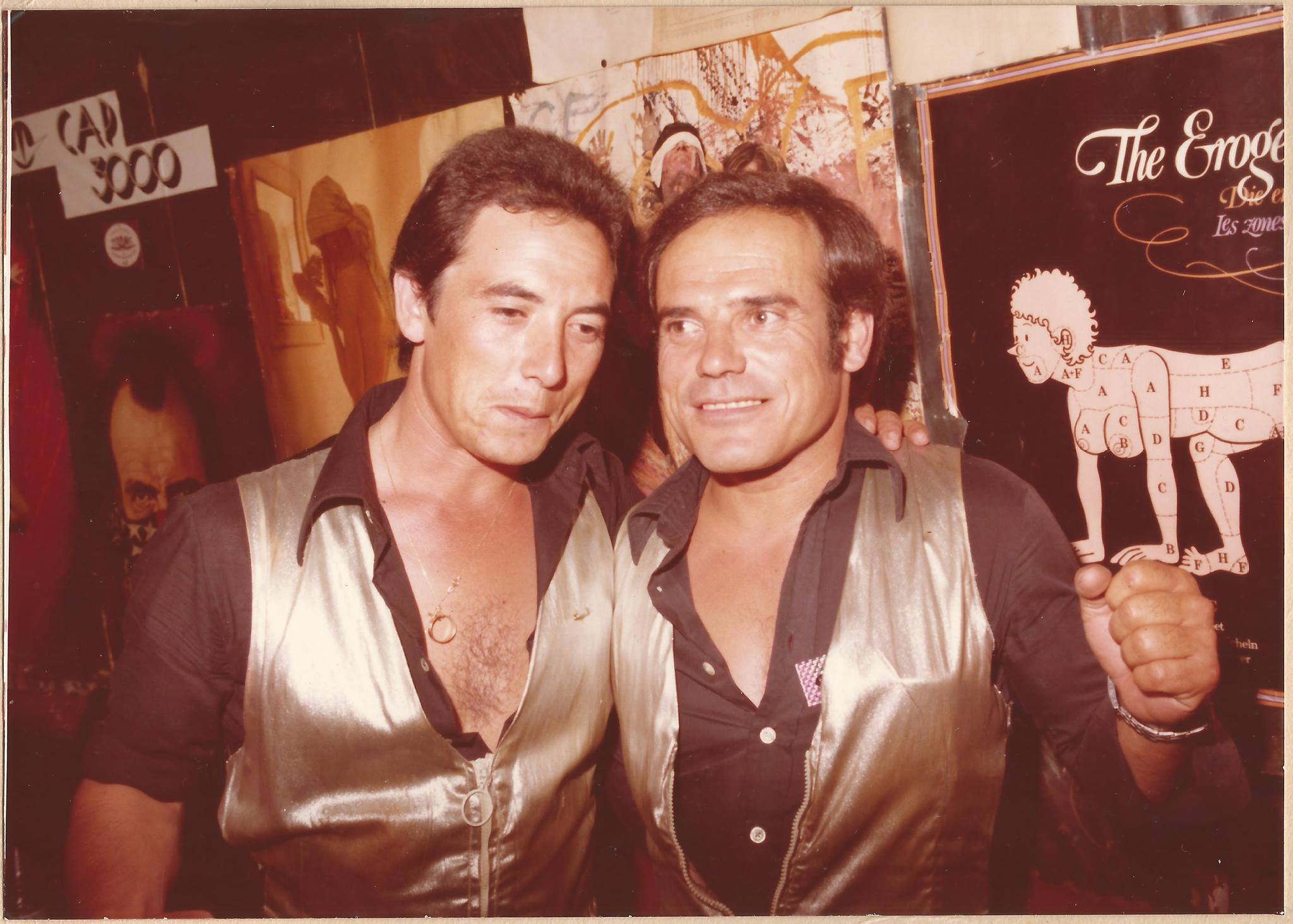 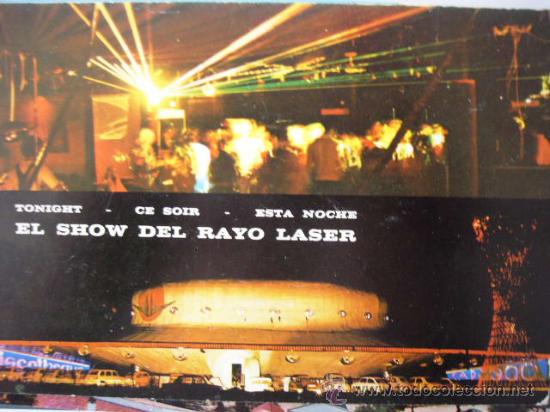 The first ever Laser Beam in Spain was installed in CAP 3000 between 1975/76. It was spectacular! It was green. The attendants were tripping with the light and, as a complement, it had smoke machines. When the smoke expanded, the laser beams drew awesome figures above the people’s heads dancing on the dance-floor. It was astounding, like being in space, it was the future, and inside of a flying saucer. 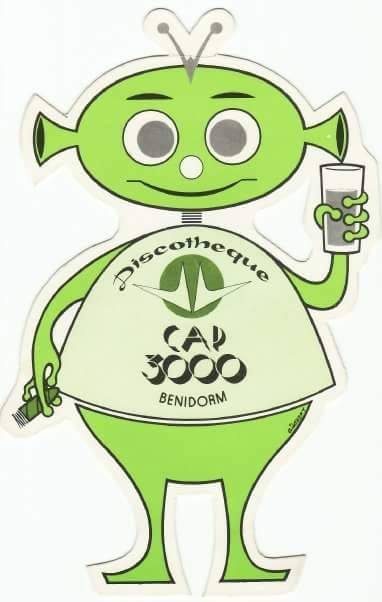 The logo of CAP 3000 was a cigar-smoking Martian with a drink on its hand sporting an T-Shirt of the discotheque. Something out of this world.

Among the performances in CAP 3000 was the Godfather of Soul himself, Mr. James Brown. And Gary Glitter who came onstage on a big motorcycle, because at the time, as Pepa Lloret (a Benidorm neighbor) remembers, “it was allowed to go onstage with big motorcycles, almost to the dance-floor. We girls were totally killing it sitting on our motorbikes inside the discotheque”

Also, Slade and Isaac Hayes among others performed live. What remains unclear is if Led Zeppelin really performed in the discotheque’s grand opening. The most reliable sources say that it was announced but that it never happened. Maybe it all was just a publicity stunt. 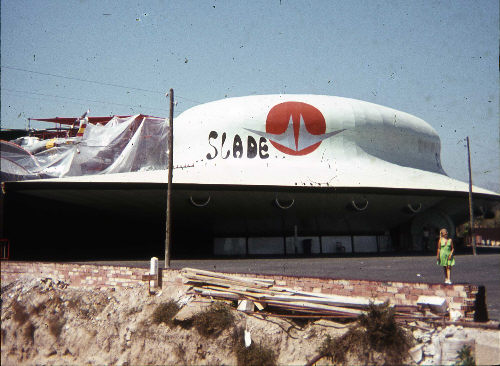 CAP 3000 advertising for the band Slade

In 1973 Benidorm already had that vertical look from its many skyscrapers. The idyllic fishing village was gone and in its place was this international center of sun-and-beach tourism where nightlife became an institution. Maybe at the time, no one knew, but the party that started there on the Levantine Coast would be the origin of a vanguard musical movement that flourished in the eighties and collapsed in the middle nineties known as “Ruta del Bakalao”. Like Luis Costa explains on his book Bakalao! “When the European EDM scene started, we had already been dancing for five years in Valencia.”

BENIDORM AT THE BEGINNING OF 1960 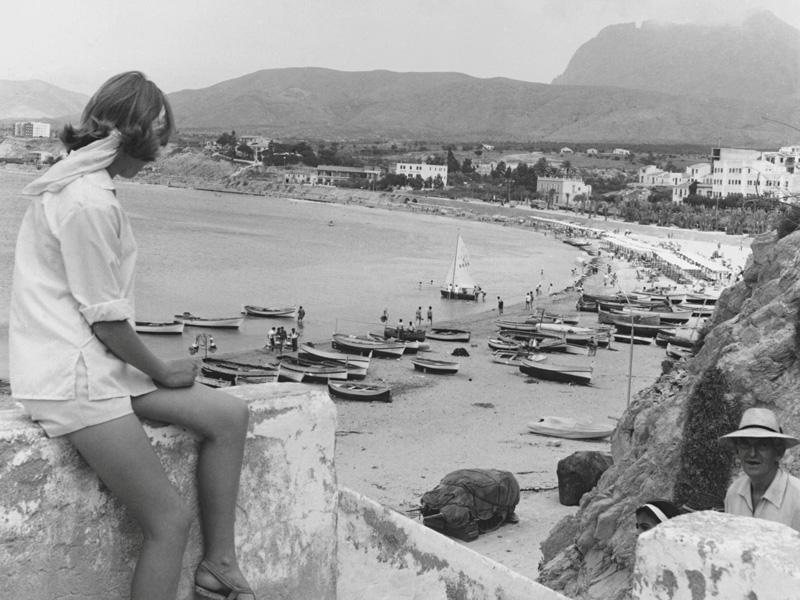 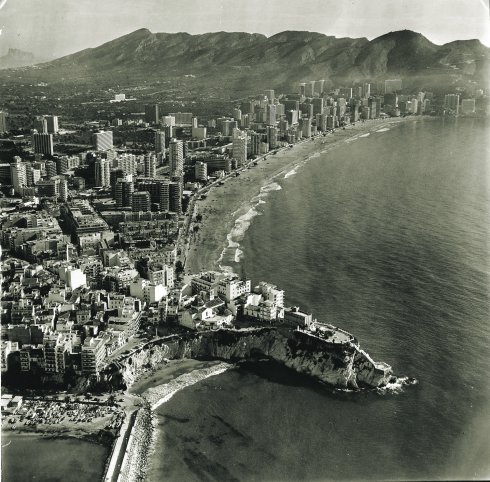 THE DIRTIEST WITH A NEW VIDEO
Scroll to top